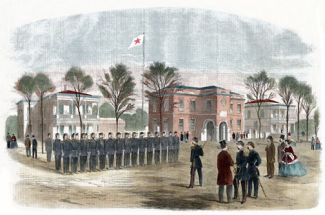 Having seceded from the Union, Georgia’s secession convention continues as delegates draft new state documents and make plans to accept an invitation from the state of Alabama to attend a conference for all slaveholding states, slated to begin February 4th.

The secession speeches, convention proceedings and ordinances of South Carolina, Mississippi, Florida, Alabama and now Georgia have expressly and repeatedly insisted that these southern states have seceded from the United States in order to preserve the institution of black (African) slavery.

The State of Georgia is attached to the Union, and desires to preserve it, if it can be done consistent with her rights and safety; but existing circumstances admonish her of danger: that danger arises from the assaults that are made upon the institution of domestic slavery, and is common to all the Southern States. From time to time, within the last forty years, Congress has attempted to pass laws in violation of our rights, and dangerous to our welfare and safety; but they have been restrained by the united opposition of the South and the true men of the North, and thus far the country has prospered, and the South has felt comparatively secure. Recently, however, events have assumed a more threatening aspect, several of the non-slaveholding States refuse to surrender fugitive slaves, and have passed laws the most oppressive to hinder, obstruct and prevent it, in palpable violation of their constitutional obligations.”

Meanwhile, Georgia’s governor, Joseph Brown (a Southern Baptist), receives a message from United States Captain Arnold Elzey, in charge of the U.S. arsenal at Augusta. Elzey requests an honorable surrender, and Elzey and Brown agree to the following terms of surrender:

1st. The flag to be saluted and lowered by the United States troops.

2d. The company to be marched out with military honors and to retain its arms and company property.

3d. The officers and soldiers to occupy quarters until removed beyond the limits of the State, and to have the use of the post transportation to and from the city and in the neighborhood, and the privilege of obtaining supplies from the city.

4th. The public property to be receipted for by the State authorities and accounted for upon adjustment between the State of Georgia and the United States of America.

5th. The troops to have unobstructed passage through and out of the State, by water, to New York, via Savannah.

Augusta militia units then take possession of the arsenal, and in the afternoon hoist a white flag with a lone red star (illustration), signifying Georgia’s sovereignty over the former U.S. installation.