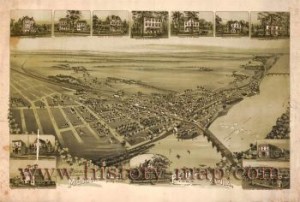 In the midst of war, church life in the North tries to retain some sense of normalcy.

Today is Saturday, the traditional day of the week on which church business is conducted (typically, churches meet on one Saturday each month to conduct business). For the Big Darby Baptist Church of Canaan Township (now Plains City), Ohio, the day is one of new beginnings. Founded in 1810, the church, following decades of temporary meeting places, dedicates a permanent wood frame building. Accordingly, the first sermon is preached in the new building.

Meanwhile, the Hancock Baptist Church of New York, founded two years ago and having dedicated a new church building two months ago, meets for its monthly business meeting. The congregation calls Saturday gatherings “covenant meetings,” a time — in addition to attending to business matters — for members to meet together and affirm their commitments to one another and the church. Today, the “covenant meeting [is] attended by few Brethren and sisters.” The language of “covenant meeting” remains a part of the church’s functioning until 1913, by which time the reporting of business meetings is more extensive and detailed, as is the case with many Baptist congregations of the early 20th century.

Normalcy, however, does not describe recent events related to the Solebury Baptist Church in Pennsylvania. As reported by this week’s Massachusett’s Lowell Daily Citizen and News:

A brute named Thomas Dilworth shot his wife in Solebury, Pa., last Sunday week. It appears she was about to join the Baptist church, to which he was opposed, and he told her if she joined the church he would shoot her. She started from home to go to church, on Sunday, when he took down the gun and discharged its contents at her.

While religious competition among Protestants of the Civil War era is often heated, and battlefields are awash in gunfire, religious friction on the home front does not typically manifest itself in the discharge of firearms.