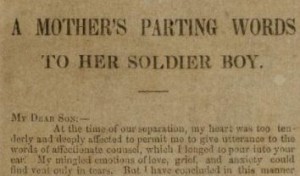 Even as Baptists on the southern home front complain about the evils of army camp life, they eagerly look for evidence that the distribution of religious literature among soldiers is pushing back the spiritual darkness so rampant.

One report from a Confederate colporter is making the rounds:

A colporter, laboring among the Confederate forces in Virginia, says that the tract, ‘A Mother’s Parting Words to Her Soldier Boy,’ recently issued by the Baptist Board of Publication located in Richmond, has been instrumental in the awakening and conversion of eight soldiers. Two other tracts, ‘Are You a Soldier?’ and “I am a Soldier,’ have resulted in the conversion of five, each.

White Baptists of the South, eager for soldier conversions, respond to such stories with great joy. The appeal to the wholesome image and memory of “mother” becomes a frequent method utilized by the southern religious press.