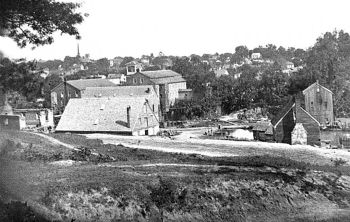 Petersburg, Virginia During the Civil War

The First Baptist Church of Northampton, Massachusetts burns today. While the building is not entirely destroyed, for the next eighteen months worship services are held in the Northampton Town Hall while the church meeting house undergoes repairs.

Meanwhile, the Educational Association of Virginia is formed today in the basement of the First Baptist Church of Petersburg. The fifty men gathered are committed to educating the masses at a time when only private and local academies exist in the state and the Civil War has made textbooks scarce and hindered educator’s from being able to communicate with one another. The organization that is formed today takes as its mission, “By all suitable means, to promote the educational welfare of Virginia and of the whole country.”

The Educational Association of Virginia changes names a number of times in the coming years, finally becoming known as the Virginia Education Association in 1925, the name that remains to the present day.

Also in Richmond, a Baptist slave is accused of theft:

A negro fellow, called Jim, the dining room servant of Robert Howard, was before the Mayor yesterday to answer the charge of stealing books, daguerreotypes, and other articles, from his hirer. Mr. Howard stated that Jim had been in his service four or five years, and that he had always been honest and faithful until within a short time past. Two or three months since Jim joined a Baptist Church, and from that time to the present these petty thefts have been committed. On searching his room, some of the missing articles were found; also, two brass keys, one of which unlocked the back door of Mr. H.’s house, and the other a door of a closet, from which articles were taken. With these facts before him, the Mayor could do no less than order him to be punished.

Does slave owner Robert Howard think that Baptists are a bad influence upon slaves?

Regardless, white Southerners fret that slaves are becoming all the more emboldened as Union efforts to free the South’s slaves advance. Their worries are not without reason; freedom is in the air, and slaves eagerly anticipate taking possession of their lives that have been stolen from them by slavery, as well as some of the possessions of whites that were acquired by slave labor.