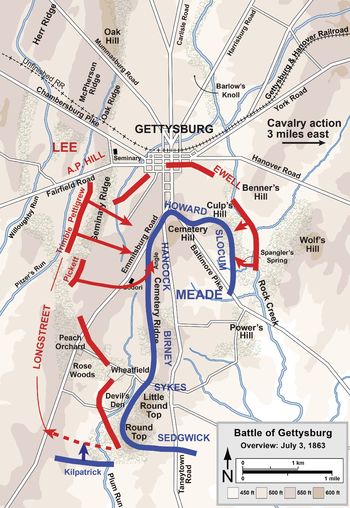 At dawn the Battle of Gettysburg resumes on the third day. The morning silence is broken by the Union XII Corps, as from atop Culp’s Hill they begin an artillery bombardment on Confederate forces embedded downhill and nearby. Within hours, Confederate Gen. Richard S. Ewell attacks the federals in an attempt to seize Culp’s Hill, but once again the Union lines hold. Now, those lines are stronger than ever.

Morning passes. Having gained no ground, Confederate Gen. Robert E. Lee shifts tactics. Now focusing on Cemetery Ridge, where he believes Union forces are stretched thin, at 1:00 pm Lee orders some 150 artillery guns to bombard the center of the Union line a mile away. Defending this part of the line is Brig. Gen. Henry Jackson Hunt, who realizes that a major Confederate infantry attack will come following the bombardment. Rather than waste his ammunition, Hunt does not initially respond as the rebel artillery strains to reach Union lines. When he finally does order return fire, it is limited in nature in order to save Union munitions for the Confederate charge sure to follow. In addition, the return fire is concentrated from the flanks of the Union center, leaving Confederate commanders with the mistaken impression that they have knocked out Union cannon in the center.

Some rebel cannons do manage to reach the perimeter of the Union line. Among the units atop Cemetery Ridge are the 108th and 126th New York Infantry Regiments, the former of which bears the brunt of the artillery barrage. Among the Baptist soldiers within these two regiments are Lieutenant Colonel Francis Pierce of the 108th and Captain Winfield Scott of the 126th, former classmates from the University of Rochester, a Baptist school. A third Baptist, Lieutenant Samuel Porter of Rochester, is also a soldier in the 108th.

Around 3:00 pm the cannon fire subsides. Some 12,500 rebel soldiers emerge from their position and begin marching across nearly a mile of open land. “Pickett’s Charge” (named after Major Gen. George Pickett, one of three Confederate generals leading the assault) has begun. Ordered by Lee, the offensive had been contested by Lieutenant Gen. James Longstreet, but to no avail: Lee is determined to take Cemetery Ridge and break the Union line.

As the Confederate soldiers begin the perilous march toward Union lines, Union Gen. George G. Meade is prepared: anticipating the evening before that Lee would attack his middle, the general had reinforced Cemetery Ridge during the night. Now, in the bright light of day, the general and his soldiers watch the Confederates advance.

Winfield Scott later said the sight of three Confederate divisions advancing across that deadly field was “grand beyond description.” Thousands of guns and bayonets in the oncoming lines gleamed in the sunlight, so that it looked like “a stream or river of silver moving toward us.”

Union cannons open fire on the exposed Confederates, who are yet far away from federal lines. A slaughter ensues.

The Confederate attack crumbled under the onslaught of Union artillery, and volley after volley of rifle fire. “The valley was full of men,” Scott said. “Like a mob they surged, and were ridden upon by officers. They swept round and round in a hopeless mass, as though they were in great conflict of thought and doubt.”

A few rebels make it across the open field and manage to breach Union lines near the Copse of Trees, obtaining what becomes popularly known as the “high-water mark of the Confederacy,” the closest the South comes to achieving military victory over the United States. Yet the pinnacle of the offensive lasts for only a few moments, as the rebels are quickly pushed back. 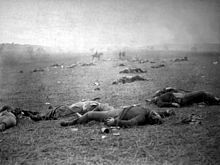 The charge is over less than an hour after it began. Only about half of the Confederate soldiers return safely to their own lines. Lee is stunned and demoralized. As the surviving Confederates stumble and straggle back to safety, it is clear that the Union has achieved a great victory.

While a few more engagements take place later today, the battle is essentially over. Lee’s Army of Northern Virginia is decimated. By the close of the day, Confederate casualties in the battle thus far total between 23,000 and 28,000, while one-third of Lee’s officers are dead, wounded or have been captured by the enemy. 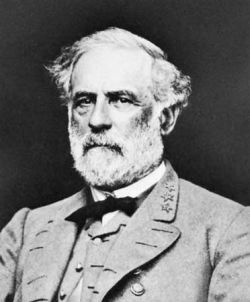 Night falls. The sounds of battle recede. The wails of the wounded and dying again pierce the darkness during a seemingly endless night.

Under the cover of darkness Lee evacuates the town of Gettysburg and renews his defensive position on Seminary Ridge.

Across the way atop Cemetery Ridge, Baptists Pierce, Scott and Porter hear the cries of the wounded in the open field and the sounds of Confederate maneuvers in town. Rebel campfires glow in the distance. The three men have survived, and live to fight another day.

In the days following, their nation hails Gettysburg as a major victory, marred only by the large number of casualties and Lee’s escape southward.