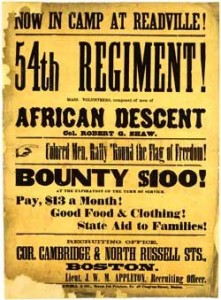 Today crowds line Boston’s Beacon Street in celebration of the deployment of the 54th Massachusetts Infantry Regiment. Massachusetts governor John A. Andrew presents the unit’s colors, after which the regiment parades down the street and to the waiting steamer De Molay for transport to Port Royal, South Carolina.

The 54th Massachusetts is a well-known African-American regiment, and their arrival in Port Royal is highly anticipated. Only six days ago, the United States War Department had established the Bureau of Colored Troops, charged with recruiting and assembling black regiments, of which the 54th is held up as a model.

Many of the soldiers are Baptists, reflective of the popularity of the Baptist faith among free blacks and slaves both North and South. Accompanying the 54th is prominent African Baptist minister Rev. William Jackson, formerly pastor of Salem Baptist Church (Massachusetts) who is now serving as regimental chaplain.

Soldiers and officers alike are ready to do battle against the slaveholding Confederacy, and their wishes will soon be granted. But for now, they cast their eyes southward as they leave the safety of Boston behind.