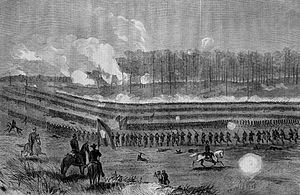 In the Atlanta Campaign, the Battle of Marietta, itself comprised of a series of smaller battles, comes to an end this day. The Union wins this battle that began on June 9. The victory consists of forcing Confederate General Joseph E. Johnston to withdraw his forces in order to protect his supply lines, allowing Federal forces to inch closer to Atlanta.

But that which is on the minds of most everyone is today’s one year anniversary of the decisive event, Pickett’s Charge, in the pivotal Battle of Gettysburg. North and South alike remember Gettysburg, and Pickett’s Charge in particular, as the turning point of the war. Since the battle, the fortunes of the Confederacy have sunk to new lows, while Union advances and confidence have grown. Northerners and black Southerners celebrate the anniversary of the victory, while mourning for lost soldiers. White Southerners remember the day painfully and wistfully, knowing that victory had been within their grasp, only to slip away.

In the trenches of the Siege of Petersburg in Virginia, Thomas C. Cheney, soldier in the First New Hampshire Voluntary Light Battery, veteran of Gettysburg and a member of the First Free Baptist Church Manchester, New Hampshire, remembers the great battle in a letter to his brother Luther.

On this Day, the first Anniverciary of the Great Battle of Gettysburg I will Celebrate by writing a few lines to you, a Much Pleasanter occupation than I was engagued in one year ago to Day for on that eventful day we were fighting all day long and at 1 OClock PM the Rebes commenced their terriffic Cannonadding and keped it up for two hours or More and then Longstreet Made his Grand Charge, and a Grand one it was, but disasterous to the Rebes and decided the Battle in our favour, how vivid and plain that scene came up before me to Day, no such Battle has been fought during this War. there was the heaviest Cannanadeing on that 3d of July that, P.M. that ever took place on this Continent, many rough scenes I have passed through since the event that day, 8 different Battles our Battery has been engagned in during this Campaign, and I have been in all that our Battery has, since it left NH and there has scarsely been a Battle fought by the Armey of the Potomac, (except during the Pernincula Campaign) but our Battery has taken Part in it, even in their Skourmeshing but enough about Self, our Battery has been in position for the last week where we are now 4 Miles South of Petersburg near the Weldon R Road, the Guns only go to the front, and every Night they return to Camp aboaut 1 1/2 Miles to the rear where the rest of the Battery is, as we have but 4 Guns now we have Spare Men. So yestarday the Spare Men went to the front and left part of the Guns Crew Stay in Camp to wash and Clean up their things and Person. To day was my turn, and as I done my washing at the Front yestarday (pulling my shirt off to wash and going without one) I improve the time to day in writing to my Friends and Relitives. To Morrow I suppose the whole Battery will be relieved and be allowed to Stay in Camp till some new move is made, which I do not look for on this part of the Field for the Presant, though there may be at any time, as you can get account of the Situation of things here and what is going on much better and quicker than I can give them to you. I will not attempt it, in fact I hardly know myself what is being done, the is nothing doing
in our front, in front of the 2nd Corps, not even as much as Picket fireing, but up around the City of Petersburg there is almost continual fireing, and Occasionaly it is very heavey, what it is for or what is being done there I have to get from the Papers the same as you do. I rec. your kind letter of the 25th, yestarday and was happy to hear from you. I am happy to hear that you are getting such good pay I suppose it is not much better than one Dollar was two years a go, but it is better than us though your Pay had not been raised any. I want to get one of these high Priced Jobs when I get home, which I trust will be in just two Months and 24 days more, if the Lord will. Then Hellen is courted hard is she, well they will do so.I am very glad to hear that he is such a nice young Man, of course he is a true Union Man, in for Old Abe for our next President, as you say, we are nierer Petersburg than Richmond but we are having to have both places, but it will take time and you must have patience, my health is good and am in good Spirets. Last Night we rec. Rations of Tomatoes in Cans, Pickled Onions and Tobacco, the first we ever got on the Armey. They were given us by the Sanitary Commissian. didn’t I have a good Meal of Tomatoes, You better believe I did my Tobacco I swapped for Tomatoes. Write me again Soon. I hear that the 1st N H Cavelry was nearly taken Prisoners this week in Gen. Willsons last Raid so if Laura does not hear from Orilan for some time She must not worry about him. give my love to your Family an Hellen