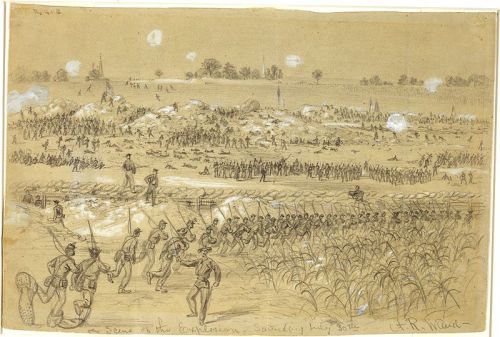 A scene from the Battle of the Crater, by Alfred R. Waud

Union forces entrenched around Petersburg have for weeks been planning a surprise, and unusual, offensive against the Rebel enemy. Today they spring their surprise — or more appropriately, they blow their surprise, as in setting off a mine near the Confederate lines.

In what becomes known as the Battle of the Crater, the Union-detonated mine blows a gap in the Confederate defenses of Petersburg, providing an opening for Union troops to exploit.

In theory, that is.

The reality, however, proves to be a bit different than what Union plotters had envisioned. As Federal troops rush forward, thousands become mired in and around the massive crater created by the explosion, milling around in confusion. Confederate defenders, realizing the situation, turn on their attackers, sealing the opening and shooting at Union soldiers trapped in the crater as if they were fish in a barrel. By the time Union forces retreat back to their trenches, they have suffered nearly 4,000 casualties, well more than twice those of the foe.

Among the Union casualties are many African American soldiers who participated in the battle. Targeted disproportionately by Confederates due to a hatred of blacks, many are murdered, while others are harshly abused while held in captivity following the battle.

Union General Ulysses S. Grant calls today’s tragedy “the saddest affair I have witnessed in the war.” Major General Ambrose Burnside, under whose command the failed plot had been hatched, is shortly thereafter relieved of his command, never to be placed in command of troops again. Meanwhile, Union and Confederate alike settle once again into their positions, and the war grinds on again in the days ahead in the dirty, hot, muggy trenches.

While the Battle of the Crater rages this day, in the historical heart of the Confederacy South Carolina Southern Baptist leaders assemble for the second day of this year’s annual state Baptist meeting. Of the surprising events unfolding in Petersburg they know naught.

Assembled in Greenville, delegates listen “with interest” to a report from the Sunday School and Colportage Board and express their “gratification at the work performed and the degree of success” of Sunday School laborers and army missionaries. They also adopt the “Report on Aid to Orphans,” which reads as follows:

The Committee appointed to inquire whether this Convention should take any steps to aid in providing for the helpless orphans of this State, beg leave to submit the following report:

It is difficult to over-estimate the importance and interest of the object referred to us. It appeals to every noble sentiment of every generous heart. If helplessness and need claim our sympathy — if innocence involved in deepest suffering demands our aid — if even self-interest requires us to avert from our land the scourge of a multitude growing up to ignorance and vice — all these considerations combine with the benevolence taught by our Lord and Master, to forbid that we should have the orphans of our State, and especially those of our deceased soldiers, to grow up without that Christian care and sympathy, which seeks to supply, as far as possible, the place of those whom God’s afflictive hand has removed. And if, at times, the magnitude of the work may seem to appall us, this only demonstrates most forcibly the need of prompt, liberal and earnest efforts of every one in every way.

Your Committee does not deem it necessary to discuss the need of doing something, or the importance of doing it at once, or the obligation which rests upon us to do all we can. The only question is the practical one. In what way most effectively can the subject be reached by this Convention? The object is one which pleads for itself. It only needs to be presented to our people to quicken the benevolence of those who have not thought deeply upon it; and appropriate channels must be provided for making available, to the largest extent, the ready liberality of those whose hearts are alive to the subject. The enterprise is one to which every good man must wish success. And if it failed, we should have the satisfaction of having done what we could. It will be more gratifying to have attempted something, even unsuccessful, for an object like this, than to have coldly neglected or timidly shrunk from it.

Something, however, can certainly be accomplished, if not at all that is needed, or all that could be wished. Your Committee venture to propose a plan which can be at once set in operation on a limited scale, and which admits of expansion according to the leadings of God’s providence, the necessities of the case, and the means that may be supplied.

We are not prepared, at this crisis, for accumulating funds to organize hereafter an extensive Orphan Asylum. Nor does a large investment in bricks and mortar, in endowment and supplies seem either feasible or desirable at present.

We suggest that efforts be made to raise funds to be at once appropriated in aid of helpless orphans; that the facilities of existing institutions of learning and of private schools be used, so far as they can be made available; that arrangements be made to call forth the benevolence of the more wealthy and less needy sections of our State, to relieve the burden of those districts where orphancy and destitution dwell most together; that public attention can be so directed to the subject as to stimulate the private exercise of charity, and arouse to action the sympathies of those who have hearts to aid, but who, for any reason, do not choose to cooperate with us; and all this will contribute besides to form a public sentiment for the promotion of general education. Whatever is thus accomplished by us, will be that much more than would otherwise have been done, will promote instead of hindering kindred enterprises on the part of other Christians or citizens, and may stir up to greater zeal those whose means and energy may enable them to accomplish the work still more thoroughly. And therein we may, and will rejoice.

It does not appear to be necessary to depart from the existing organization of the Convention to promote this object. We have already a Board of Education, designed hitherto to promote especially theological education. Until that object can be again successfully forwarded, on the restoration of peace, the attention of that Board may be appropriately turned by direction of the Convention to promoting the sound and thorough education of the orphans of our land under religious influences.

Your Committee propose the following resolutions:

1. Resolved, That we recognize the obligation as Christians and as patriots to do our full share towards the proper education of the youth of our State, and especially of the orphans of our deceased soldiers.

2. Resolved, That the Board of Education of this Convention be authorized and instructed to take this matter in charge, and to mature and carry out a plan for the purpose in accordance with the views herewith presented.

3. Resolved, That the said Board shall endeavor to secure at once the cooperation of our associations and churches in any way that may be practicable.

Even as the report is being read, the number of orphans grows.