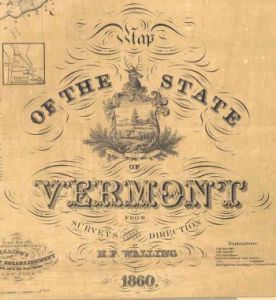 Today at Florence, Alabama, Confederate Lieutenant General John Bell Hood is finally positioned and ready to cross the Tennessee River into the state of Tennessee.

Hood’s hope during his march through Alabama has been that Union General William T. Sherman will follow him, thus taking Sherman and his armies away from Atlanta. The Union general has not yet taken the bait, but Hood hopes he may do so yet.

Meanwhile, the march into Tennessee is planned as a way for Hood to ultimately meet up with and reinforce General Robert E. Lee at Petersburg. A long winter, however, stands between Hood and Lee. Not to mention that unbeknown to Hood, his dalliance in crossing the Tennessee River to date has allowed time for the Federals to prepare for the Rebel’s Tennessee invasion.

Meanwhile, Baptists in the North are growing and prospering, including the congregation of the First Baptist Church of Burlington, Vermont. The latest edition to the church is a pipe organ, and not just any pipe organ.

The instrument is built by Elias and George Greenleaf Hook of Boston, the foremost organ builders in all of New England. It is the 342nd organ crafted by the Boston organ makers.

The acquisition of such a fine musical instrument is of interest to the town of Burlington. Today’s Daily Free Press reports on the pipe organ:

The new organ manufactured by the Messrs. Hook of Boston for the Baptist Society in this place has been erected in their new and elegant place of worship, under the superintendence of Mr. F. H. Hastings, agent for the makers, and was tried in the presence of a small audience of amateurs and music lovers, on Friday evening. The performers were Mssrs. Gerrish of Boston, S. C. Moore and Proctor of this place, who displayed the quality and powers of the instrument very fully and skillfully. The universal verdict was that the organ is a superior one, of unusual power for its size, and combining many valuable new mechanical arrangements.

Thus while the Southern landscape is littered with shuttered and shattered Baptist churches, the thriving Baptists of Burlington, Vermont celebrate a significant moment in their history, a moment that portends great things for the future.