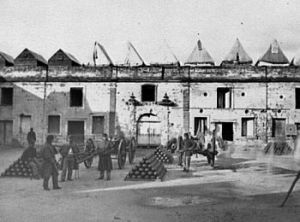 The ranks of former slaves-turned-freedmen is growing daily, now numbering well over a hundred thousand. In Union-controlled areas along the Southern sea coast, Northern religious leaders and reformers, hand-in-hand with Federal forces and often financed by philanthropists, provide housing, education and life skills, in addition to assisting their charges in spiritual matters as the former slaves enjoy newfound freedom of religion and worship.

One such place is St. Augustine, Florida, under Union control since March 1862.

Leading the efforts in St. Augustine is Rev. Issac. W. Brinckerhoff, a Baptist preacher from New York who has devoted his life, leaving his family in New York, to fulfilling his personal conviction that freedom is God’s will for all persons. A former employee of the American Tract Society, Brinckerhoff was appointed in March 1862 to the position of Superintendent of Contrabands, tasked with the education and spiritual care of freedmen through the National Freedmen’s Relief Association at Beaufort, South Carolina. Transferred to St. Augustine in February 1863, where he remains to this day, the Baptist pastor ‘s responsibilities remain the same. In his spiritual and educational capacity he works with Methodists and Presbyterians, in addition to Baptists (the latter being the most common faith among freedmen).

Today the Baptist minister writes a letter to the head of the American Missionary Association, an interdenominational organization heavily involved in efforts to educate freedmen.

From a sincere desire to serve the interests of your Society, and promote the cause of Christ, I submit for your consideration, and that of your Committee the following facts.

I came here in Feby. 1863 as Government Superintendent of the colored people, under appointment from Genl. Saxton, and am still in that position.

When I came the colored people were dependent for gospel privileges on occasional visits from ministering brethren, and the Chaplain of the regiment stationed here.

Although a Baptist I judged it best to refuse the desire of the Baptist Brethren to be their minister, and insisted that as the whole congregation would not exceed 150 persons (a large portion of the colored people here are attendants and devoted adherents of the Roman Catholic Church), my preaching should be to all who would attend, without regard to denomination or class. The Methodist brethren cheerfully gave me their Chapel for the purpose, and all have worshipped together in harmony, peace and love, and listen eagerly to the preached word. Aside from these services, each denomination was left to the [..?..] enjoyment of all Church privileges according to their peculiar view and practices.

In July last, Rev Gorham [sic] Greeley came here, ostensibly for his health, intending to labor among the colored people, under the auspices of Bishop Payne, of the African Methodist body. He found the field fully occupied. Still he applied to Rev Mr Lewis, who represents Bishop Janes in this Department, and under order of the Secretary of War, holds control of the Methodist Episcopal houses of worship, for the possession and control of the Methodist Chapel where my services were held. On account of Mr G’s connection with Bishop Payne, and the satisfactory manner in which I served the Methodist brethren, Mr. L. declined to accede to his request. Mr. G. then dissolved his connection with Bishop P. and sought connection with your Society, evidently to remove Mr. Lewis’ objection and thus brought Mr. L. to consider his application. Upon being notified by Mr. L. of the change, I relinquished my charge of the Chapel, and removed my service, still retaining its Union character, to the Presbyterian Meeting House. The small congregation of 150 is therefore [..?..] and your Society is supporting a mission here, who, so far as the colored people are concerned, is doing work that was being done when he came here, and would be fully done if he were not here, except so far as it tends directly to promoting the interests of the Methodist denomination for which special purpose, I am sure, but a very small part, if indeed any, of the contributions made to your treasury as intended. As there is no Chaplain here at
present, Bro G could, but for the change he has unnecessarily assumed, make himself useful among the soldiers here. They must now be neglected, in a measure, while the colored people have more care than they need.

Again, the Nat. Freedmens Association have at this post, four excellent and fully competent teachers of the colored school. Their schools are confessedly equal to any in the Department and surprising progress is being made. Mrs Greely, also under appointment of your Society, has intimated a strong desire to have her daughter come here as a teacher. The whole colored population at this place does not exceed six hundred, of which 165 are enrolled as scholars in the Freedmen’s Association school.

If Mrs G. is making arrangements with you for an increase of the force of teachers at this point, I am free to say that no more teachers are needed, and that the expense of sustaining such teachers will be a useless expenditure. Besides, division will be made, and much hurt done to the cause. It is really a pity, and I doubt not you so regard it, that when so many waste places are unprovided[?] for, rival schools are established when instead of good being done, harm is the result.

I am not connected with the Freedmens Association, nor any other Society. I am in the employ of the Government, and desire only the welfare of the colored people. I have no private end to serve, and wish no concealment in this matter. I state only facts and hold myself responsible for them.

Thankful for the Kindness I received at your hands while north in May last, and praying for the prosperity of your Society,

I remain Yours Respectfully,
I W. Brinckerhoff

Many Northern Baptists believe the future of the South is found in places like St. Augustine, where freedom is the domain of all and racial barriers are being torn down for the cause of Christ and nation.