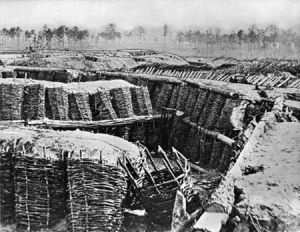 Five Forks is a road junction in the vicinity of Petersburg, important to the viability of Robert E. Lee‘s last supply line, the South Side Railroad. Today the Federals advance upon the junction and score a significant victory over the Rebels, capturing many prisoners and forcing, by the end of the day, Confederate defenders into a vulnerable position.

Suddenly, the Confederate line is at the point of breaking. Little now stands between Ulysses S. Grant’s Union forces and the Confederate capital of Richmond. Might the war be effectively over within a matter of days?

While the battle for Richmond hastens to a tipping point, readers of this week’s Virginia Baptist Religious Herald–operated by Baptist editor Jeremiah B. Jeter and based in Richmond–are encouraged to trust in God for their safety and the well-being of their nation. Defeat may be on the horizon, yet can God ever truly be thwarted? The author of such encouraging words is James A. Moore, a Southern Baptist missionary with Lee’s Army of Northern Virginia.

I take this method of acknowledging the receipt of about six hundred dollars contributed by the members of the army and a portion of the citizens of Halifax, Va., and of Person, N.C., for the purposes of the Sunday School and Publication Board. During a short visit home, when I told the brethren and friends that the Board was in need of funds, and that I was taking collections in its behalf, they all showed great willingness to give. The little flaxen haired girl of seven, and the grey headed man of three score, the young man in strength forward their offerings to this noble, Christian enterprise. One lady gave forty dollars, and induced her son, quite a youth, to give ten. Two small girls gave five dollars apiece, having thus been taught no doubt by a pious mother. The women of the South have not only given, without murmuring, their husbands and sons to the country’s call–they have not only been hopeful when others have been gloomy and desponding– they have not only sought opportunities to minister to the temporal and eternal welfare of the soldiers–but they are teaching their very infants to appreciate and support alike the cause of right and independence, the cause of truth and of God.

All things considered, I hope we are on the eve of a better state of things. Presumption and despair are, I trust, giving place to an humble reliance on the power and mercy of God. And why not rely on Him? “He is the rock, his way is perfect: for his ways are judgment; a God of truth and without iniquity, just and right is he.” Especially, why should the Christian hide himself in sullen gloom when God by his providence is speaking to the nations! Why should he droop and wither under the chastening rod of his Father? … Let Christians rise adequate to the occasion. Wars, and famine and pestilence, are some of God’s agencies for bringing the world under the dominion of his Son. But these dread agencies are no more His ministers than are His people. They are his especially commissioned ones in this grand and glorious work. Let them assume their high position and enter cheerfully on the discharge of their exalted mission. Let them not place God under the necessity of using His more terrible ministers for the conversion of the world to his Son.

Defeating the Union or converting the world to Jesus–which is most important? With the fall of the Confederacy imminent, are Southern Baptist elites seeking a way to preserve the righteousness of the Southern way of life for the sake of the world?

So close to the earthly defeat of the Confederacy is this week’s edition of the Herald that it is the last until October, months after the war ends.