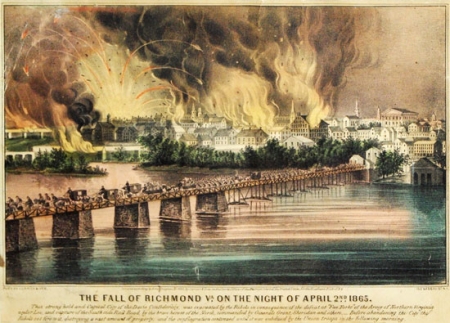 Following yesterday’s victory in the Battle of Five Forks at Petersburg, Grant determines to make a frontal offensive on Lee‘s defenses. In the predawn hours of a Sunday morning, Gen. Horatio Wright’s Sixth corps emerge from their trenches and break through the Rebel lines, followed by offensives on the part of the Second and Ninth corps. Suddenly, the Confederates, their numbers far too few to stem the tide, are routed. The siege of Petersburg is broken, the road to Richmond open. Only heroic efforts by a handful of key Confederate defenders prevent the Federals from marching on the Confederate capital this day.

Unbeknownst to Grant, Lee had decided the previous night to abandon Petersburg. This morning’s Union assault reinforces his decision.

Confederate president Jefferson Davis is attending church services in Richmond when the telegram arrives from Lee: “I advise that all preparation be made for leaving Richmond tonight.”

Jumping up, Davis rushes to his offices and instructs officials to destroy government documents and then leave town. Stacks of papers are hauled outside and set ablaze. Startled observers see the flames. As the smoke drifts skyward, rumors begin swirling around town. Something is wrong. Has the fighting at Petersburg been renewed?

As Richmond collapses internally, U.S. President Abraham Lincoln receives a telegram from Grant informing the president of the fall of nearby Petersburg, news that brings great joy and relief to the president.

At four o’clock in the afternoon the departure of the Confederate government is formally announced. Mayhem immediately ensues. From late afternoon through the night, Richmond’s white elites stream out of town. On horseback, in train cars and carriages and skiffs and boats, or pulling carts, they take what they can.

During the night Confederate soldiers in Richmond work quickly to destroy the stocks of tobacco, cotton and food stored in warehouses. When local poor whites see the massive quantities of food being brought out of secret storage, they react with disbelief, having for many months lived on the edge of starvation because of Confederate officials’ insistence that there was a shortage of food. An enraged crowd quickly forms and begins looting at will.

Amidst the looting, soldiers set fire to tobacco and cotton bales. The flames mingle with those from piles of government documents yet burning. The wind picks up, spreading the flames to the business district. Loaded shells at the iron works go off, then the arsenals aboard docked warships explode with such force that windows are shattered for a radius of two miles. Hundreds of buildings are eventually destroyed in the conflagration.

Chaos and destruction thus reigns in the city that only twenty-four hours earlier was carrying on as usual. White Richmonders whose hopes were bound up in the Confederacy are fearful of their future. Black Richmonders, on the other hand, are jubilant. The city has fallen and freedom is nigh.

Among both white and black, Baptists abound, experiencing the extremes of emotions this day and night. Many for decades have worshipped together in the same meeting houses, together under one roof yet separated inside, blacks sitting in the balcony, slaves often forced to attend by their masters.

A new morn is approaching. The racial dynamics of Richmond’s Baptists will forever be changed.