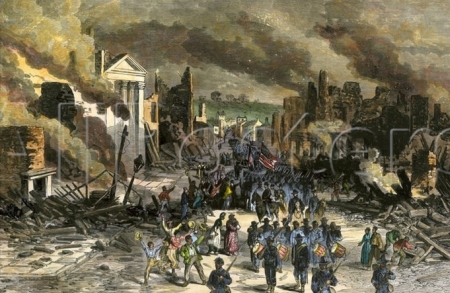 Freedom comes to the Confederate capital this day, although many of the white citizens yet remaining in the city see anything but freedom.

As the sun dawns, vast destruction stretches as far as the eye can see.

Worse yet, soldiers in blue are approaching the city.

As the sun rose on Richmond, such a spectacle was presented as can never be forgotten by those who witnessed it… All the horrors of the final conflagration, when the earth shall be wrapped in ‘flames and melt with fervent heat, were, it seemed to us, prefigured in our capital. The roaring, crackling and hissing of the flames, the bursting of shells at the Confederate Arsenal, the sounds of the Instruments of martial music, the neighing of the horses, the shoutings of the multitudes… gave an idea of all the horrors of Pandemonium. Above all this scene of terror, hung a black shroud of smoke through which the sun shone with a lurid angry glare like an immense ball of blood that emitted sullen rays of light, as if loath to shine over a scene so appalling. … [Then] a cry was raised: ‘The Yankees! The Yankees are coming!’

“The Yankees are coming!” That which is a cry of horror for whites is salvation for blacks.

For generations slavery has been the lot of most of Richmond’s black population, a bondage long justified among white Baptists’ as God’s will for the inferior black race. Slavery, after all, is never condemned in scripture.

Black Americans, however, have all along known that white appeals to scripture are invalid. For slaves, the greatest biblical themes have long been liberation, freedom, equality. Denied their biblical humanity here on earth, generation after generation of blacks, beaten, abused and dehumanized (often by self-proclaimed “Christian” masters) have consoled themselves by focusing on the afterlife, looking forward to a heavenly reward for their faithfulness in the face of a life lived in hell.

But now, at long last, freedom on earth has arrived! The sight of Union troops, many of them African Americans, marching in the city is the grandest thing that Richmond’s slave population has ever seen.

One eyewitness, a slave in Richmond and, after the war, a Baptist minister, describes the scene this way:

…On Sunday, April 2nd, 1865, there was great excitement in Richmond; General Grant had taken Petersburg, and was closing in around Richmond. In the afternoon, many of the families commenced to leave the city. Late in the evening Mr. Jefferson Davis left the city, also General S. Cooper. About 4 o’clock on Monday morning, April 3rd 1865, the magazine was blown up–the report was heard for miles. The Rebels, on leaving the city, set fire to the large tobacco warehouses, which soon spread to other buildings. About 8 o’clock, the United States troops came in and took possession of the city. Before they could stop the fire, great damage had been done. The joy and rejoicing of the coloured people, when the United States army came into Richmond, is almost beyond description. Many of the old men and women had prayed for the day they then beheld, and could hardly realise it. The churches were opened, and hundreds met for prayer and praise. Among the many songs of jubilee, this was the chorus of one:–

Abraham Lincoln’s Emancipation Proclamation had taken place on January 1, 1863. But in reality, emancipation days in the Southern states transpired at different times, dependent upon when Union armies occupied Southern cities. Today, April 3, is emancipation day for the Confederate capital, and from henceforth is annually celebrated by the city’s black community.

Lee’s diminished Army is yet afield and Jefferson Davis is on the run, neither of which much matters anymore. The seat of the Confederacy is conquered. Freedom has triumphed.