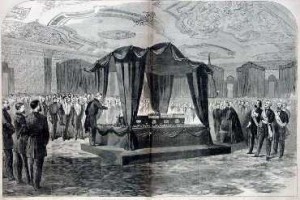 Today is the funeral of the one whom many already consider the greatest president ever.

Shortly past noon the service begins. Pastors from the North’s major Christian denominations are represented. Dr. Charles H. Hall, rector of the Episcopal Church of the Epiphany, reads scripture: John 11 and 1 Corinthians 15. Methodist Episcopal Bishop Matthew Simpson of Philadelphia prays and leads those present in the Lord’s Prayer, with many shedding tears. Dr. Phineas D. Gurley, pastor of New York Avenue Presbyterian Church were the Lincolns sometimes attended, then preaches the sermon. “Faith in God” is the message and Mark 11:22 the text. Dr. Edwin H. Gray, pastor of the city’s E. Street Baptist Church and chaplain of the Senate, closes the service with this prayer:

God of the bereaved, comfort and sustain this mourning family. Bless the new Chief Magistrate. Let the mantle of his predecessor fall upon him. Bless the Secretary of State and his family. O God, if possible, according to Thy will, spare their lives that they may render still important service to the country. Bless all the members of the Cabinet. Endow them with wisdom from above. Bless the commanders in our Army and Navy and all the brave defenders of the country. Give them continued success. Bless the Ambassadors from foreign courts, and give us peace with the nations of the earth. O God, let treason, that has deluged our land with blood and desolated our country, and bereaved our homes and filled them with widows and orphans, which has a length culminated in the assassination of the nation’s chosen ruler, — God of justice, and Avenger of the nation’s wrong, let the work of treason cease, and let the guilty perpetrators of this horrible crime be arrested, and brought to justice! O hear the cry and the prayer and the wail rising from the nation’s smitten and crushed heart, and deliver us from the power of our enemy, and send speedy peace into all our borders. Through Jesus Christ our Lord. Amen.

Afterwards the funeral procession begins. A detachment of “colored troops” leads the way. Kentucky Baptist layman and U.S. Congressman, Green Clay Smith, is one of six pallbearers who represent the House of Representatives. Crowds line the street and peer down from housetops. The procession ends at the Rotunda under the Capitol Dome, where Lincoln’s body is to lie in state as a bereaved nation offers it respects.

In many other cities church services, white and black, are also held this day in remembrance of Lincoln. Rev. George Dana Boardman presents “An Address in Commemoration of Abraham Lincoln” at Philadelphia’s First Baptist Church. And in Cincinnati’s African Zion Baptist Church, Elder Wallace Shelton delivers a “Discourse Upon the Death of Abraham Lincoln, Late President of the United States.”

We come here, to-day, to mourn as those who have lost a father — as those who have lost their best earthly friend. We come to mourn over the death of the Chief Magistrate, the head of the nation, the father of the people. He is dead. He was murdered. We have seen how much there was beautiful, and excellent, and gentle in his Christian character; he had so challenged our love, so awakened our gratitude, so knit himself to our affections….

Then he expresses determination to press on in the march of freedom:

We, the colored people, have been taunted and sneered at in the midst of our distress by mean men and mean women, who have said to us, more than once, ” “Well, Mr. Nigger, what will you do now, father Abraham is gone?” We felt wrath kindling in our bosoms, but it is not ours to kill. There is indignation in the hearts of all patriots, and henceforth we shall hear less of this insulting language. In due time, and in a legal way, retribution must be visited upon the enemies of the nation, and of liberty to all men….