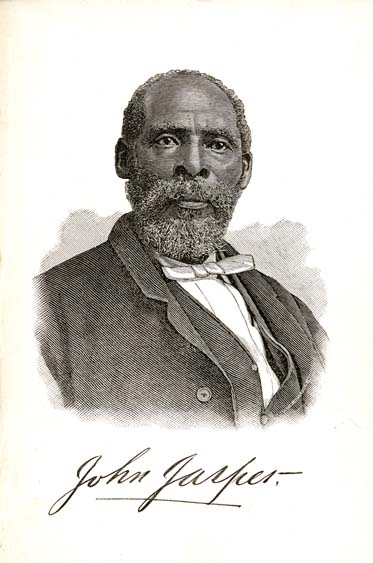 The association is created from a meeting held at Richmond’s Ebenezer Baptist Church. Three congregations in Richmond, three in Petersburg and one in Manchester comprise the seven churches represented whose combined membership is nearly 10,000.

Some individual Baptists from out of state also attend the gathering.

Evidencing the freedom they now enjoy, delegates ordain six of their own as elders during the gathering, including William Harris, Richard Wells, and John Jasper. Formerly a slave, Jasper later establishes the Sixth Mount Zion Baptist Church of Richmond and becomes one of the most well-known black Baptist preachers in late 19th century America. Of Jasper the minutes of this first associational gathering note, “We could but admire the aged servant of God as he stood before us with his shining locks white with many years of toil and labor, having seen the salvation of God.”

The association also serves as a vehicle for expressing African Americans’ interpretation of the war and post-war years, a view of history that for over a century following is absent in America’s public school textbooks.

The association gave immediate voice to a distinctly African American view of the world. For instance, while many white Baptists in Virginia viewed the Civil War through the lens of states’ rights and Northern aggression, black Baptists saw events differently. William Williams, the association’s founding moderator, declared that, through the war, God had freed people from “servile despotism” and the “tyrant’s lash.” The abolition of slavery, he said, was something for which black Baptists had long prayed. And while black Christians and their white supporters had often likened the event to Exodus in the Old Testament—Abraham Lincoln was popularly associated with Moses—Williams instead described this new freedom as a type of Easter, “that morning when Jesus, by his resurrection, unlocked the gates of death.” This theological shift was important, but so was the very act of assembling. “It would have melted the hearts of our oppressors to witness this heavenly scene,” [attendee John] Oliver wrote in the [associational] minutes.

The formation of the Shiloh Colored Baptist Association serves as a model for the establishment of future black Baptist associations.