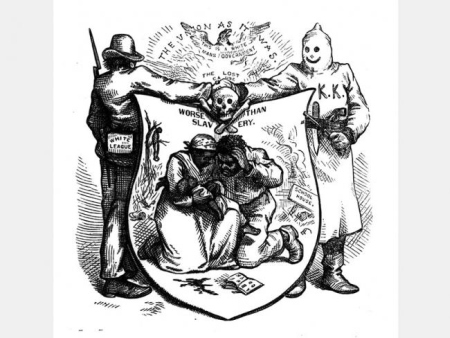 This month the Ku Klux Klan begins taking shape in the Pulaski, Tennessee law office of Thomas M. Jones. The six men who establish the KKK maintain long-held beliefs, as do most white Southerners, in white supremacy and black servitude. Union efforts to bring equality to freedmen further fuel their anger.

From this mix of racial hatred the Klan in the months and years to come grows and expands, employing terrorism against blacks and carpetbaggers in an effort to derail the efforts of Northern politicians, philanthropists and missionaries to provide education and political empowerment for Southern blacks. Many white Southern Baptist men are involved in the Klan during Reconstruction.

While the Klan is emerging this month, African American leaders in Selma, Alabama come to the conclusion that efforts by Northern missionaries to educate the town’s black children are inadequate. In response, Alexander Goldsby, a deacon at the First Colored Baptist Church, joins forces with fifteen other African American ministers in calling for more support for black schools.

Hearing their pleas, Joseph H. Sears, county superintendent of education, in 1866 opens a black school in the basement of First Colored Baptist Church. In the months and next few years, other black schools emerge, despite the ambivalence and even opposition of many white citizens.