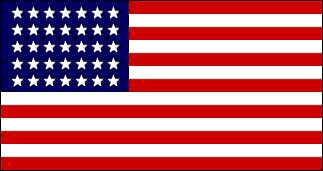 For white Southerners, many impoverished in the wake of their Confederacy’s defeat, the day is the darkest July 4th ever as free blacks and U.S. soldiers parade through Southern cities and the Emancipation Proclamation is read alongside the Declaration of Independence.

Evidencing little to no regard for the Declaration’s proclamation of liberty and justice for all, many white Southerners remain committed to white supremacy and black servitude. So bitter are their feelings that some vow to never again celebrate the 4th of July.

Northerners, black and white alike, are of a decidedly different opinion.

In Washington, D.C., the National Colored Monument Association holds a celebration in honor of Abraham Lincoln, the first national Fourth of July celebration in the U.S. by African-Americans. The gathering raises funds for the establishment of an educational institution for African Americans, to be named the Lincoln Monument Institute. Black abolitionist William Howard Day delivers a speech.

In Sarasota Springs, New York, the Declaration of Independence and the Emancipation Proclamation are read aloud at the Baptist church:

Something respectable in its way was done at the Baptist Church where an address suited to the natural aspirations of the day, was delivered by Rev. Dr. SPRING; the Declaration — which our forefathers made, but which has not yet been fully carried into effect — that all men were born free and equal, &c., was read. And here a new feature was introduced — one worthy of imitation throughout the land in all time to come — the reading of the Emancipation Proclamation. The day that proclamation was issued will at some future time be made a holiday.

An address delivered at the First Baptist Church of North Adams, Massachusetts praises 1865 as the fulfillment of the promises of 1776. Victory over the Southern slaveholders’ rebellion is celebrated, a victory bringing liberty to all.

Another celebration of victory over the South takes place in Newton and Belvidere, New Jersey. Churches hold festivals as part of the day’s events, which are “well attended, especially the Baptists’ stand in the County Park which was still thronged when darkness fell.”

In New Jersey near the Baptist meeting house at Hopewell, a monument to the late John Hart, signer of the Declaration of Independence and a friend to Baptists, is erected. In 1747 Hart had donated land on which to build the Hopewell Church.

Some American (Northern) Baptist missionaries serving abroad, learning of the defeat of the Confederacy, also celebrate this day. In Bangkok, Thailand a celebration among Americans in the form of a procession of boats takes place near the Baptist mission buildings. The boats are escorted by a band of 25 trumpeters from the local king’s court.

In Louisville, Kentucky, Union General William T. Sherman conducts a final inspection of the armies of the West, while in the West Missouri’s new Constitution goes into effect.

In short, never have freedom’s ideals reached such lofty heights of reality as this Fourth of July, even if white Southerners grumble and pout and determine to do what they can to prevent African Americans from enjoying the legal privileges they now have as freedmen.