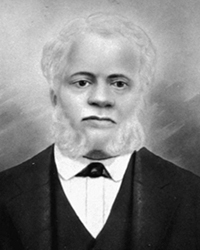 The closing months of the war have been a bitter time for many white Floridians.

Florida governor John Milton, despairing of the collapse of the Confederacy early in the year, had committed suicide on April 1. His last words to the legislature had been, “Death would be preferable to reunion.” When news of the Lee’s surrender to Grant on April 9 reached Florida, the state’s adjutant general took it upon himself to retrieve the Confederate battle flags for hiding, lest they fall into Union hands.

Union Brigadier General Edward McCook and his staff, arriving in Tallahassee on May 10 from Macon, Georgia, peacefully established federal control over the state. Confederate troops relinquished their arms, were paroled, and turned homeward.

Finally, today, Florida officially surrenders to the Union in a formal ceremony. The United States flag is re-hoisted over the state capitol and McCook reads the Emancipation Proclamation. The war in Florida is over, enslaved blacks are now legally free, and Reconstruction begins.

Among the thousands gaining freedom this day is black Baptist minister James Page (1808-1883) of the Tallahassee area. But unlike almost all other slaves in Florida, Page’s freedom is somewhat of a formality, for although legally a slave he has lived largely as a free man since the 1854 death of his owner, who had willed the enslaved Baptist minister to be the manager of his estate and “protector” of his widow. The charge Page keeps faithfully for the remainder of his life.

Following the war, Page continues preaching among black citizens in an itinerant capacity, even as he, having earlier received some level of education, assists freedmen in obtaining education. In 1868 Page opens one of the first schools for Florida’s African Americans, the Page School Society. He assists in the formation of and African-American Bethlehem Association #1 in 1879 and the Live Oak of Florida Institute (now the Florida Memorial College), with the assistance of the American Home Mission Board, in 1880.

Page remains an active preacher until the final days of his life, passing away at age 75.