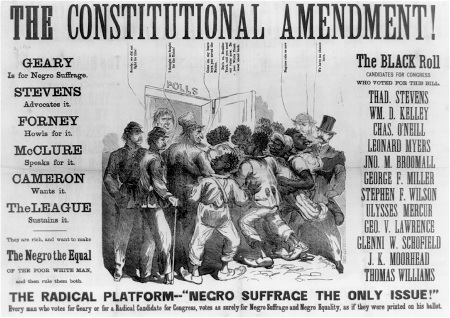 Meeting in Detroit’s Second Baptist Church, African American, the Colored Men’s Convention of the State of Michigan convenes this day.

Delegates to the convention vote to establish the State Equal Rights League of Michigan, an organization to advance the “rights of the colored people” of Michigan. “Colored suffrage” is on the ballot for November 1866, and those assembled this day are asked to support canvasing efforts to encourage Michigan’s white electorate to vote for black voting rights.

While suffrage is of utmost importance at this time, the organization also devotes itself, in its Constitution, to “encourage sound morality, education, temperance, frugality and industry, and promote everything that pertains to a well ordered and dignified life.”

Although unable to see the future with certainty, the league thus outlines a path that many African Americans for the next century will pursue in the face of white racism in the North and persecution and terrorism in the South.

A number of resolutions are passed during the conference, including one in memory of U.S. President Abraham Lincoln.

Resolved, That we point with exultation and pride to that epoch in history which records the noble, patriotic philanthropic and humane deeds of our much beloved and ever to be praised late Chief Magistrate, Abraham Lincoln, who, though tardy, yet sure in the march to the prison house, there to unlock the door and let the poor slave go free. May his name be ever cherished in the memory of all impartial lovers of liberty until the last day of recorded time.

Another resolution recognizes and expresses solidarity with freedmen of the South.

Resolved, That in view of the many obstacles, difficulties, and embarrassments that our brethren the freedmen of the South have to encounter in their struggles from a state of slavery to that of liberty, causes our very hearts to burn within us. We assure them that we as their brethren–many of us  have worn the same galling yoke–fully comprehend their position, and they have our united sympathies, believing that the day for equal rights and justice at home to all men is near.