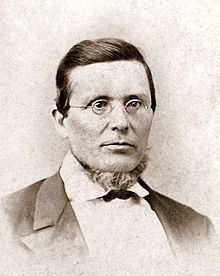 Today’s Biblical Recorder, newspaper of North Carolina Baptists, notes a visit by Thomas H. Watts–Confederate Attorney General and prominent Baptist laymen of Montgomery, Alabama’s First Baptist Church–to Grace Street Baptist Church of Richmond, Virginia for a colportage meeting (that is, a meeting focused on the printing and distribution of Bibles and Baptist literature to Confederate soldiers). The meeting is also attended by A. E. Dickinson, director of Virginia Baptists’ Colportage Board.

The mass meeting held Sunday evening in the Grace Street Baptist Church, was largely attended and proved a very interesting occasion. After some remarks by Rev. Dr. Ryland, explanatory of the nature of the work, Hon. Thomas H. Watts, Attorney General of the Confederacy, made a fine address. He has been, for seven months, commanding a regiment, and gave, as his earnest conviction, that in all its bearings this cause is one of the greatest of the age. He told some interesting facts which had come under his observations illustrating the desire of the soldiers to have reading matter, and how apt they are to be benefitted thereby. Col. Watts is a man of ardent piety as well as of great ability. For years he has been a constant attendant on the anniversary meetings of his denomination (Baptist,) and never fails to plead the claims of any cause which may tend to do good to the souls of his fellow men.

Professor Lewis Minor Coleman (now captain of a company) followed in a speech of great ability. He mentioned that one man in his company had carefully read through the New Testament and the Psalms twice in one month, while in the hospital at Strasburg, and yet he was an irreligious man. The monotony and inertia of the camp, and the absence of the demoralizing literature which before the war flooded our country from the North, renders this a most favorable opportunity for doing good to the minds and souls of our men.