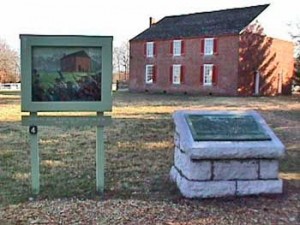 The Battle of Chancellorsville (Virginia) continues. Having driven federal forces out of Chancellorsville, Confederate Gen. Robert E. Lee takes a quick respite only to learn that Union Maj. Gen. John Sedgwick has broken through at Fredericksburg and is marching on his rear. Thus the battle soon resumes.

Caught in the middle of the action today is Salem Baptist Church, within and around which a battle within a battle rages: the Battle of Salem Church.

Built in 1844, the church building had been constructed to serve a growing population west of Fredericksburg. Due to the war, the congregation at the present has dwindled to a small number, as many of the male church members are serving in the Confederate Army.

Today, Confederate sharpshooters stationed in the church’s gallery fire upon advancing federal troops. Returning fire, Union soldiers pockmark the church with bullet holes. During this day and the next, the church is in the center of a fierce and bloody contest.

When the smoke clears from two days of intense fighting, Union forces have retreated, leaving to General Lee and his Army of Northern Virginia a significant victory. The Battle of Salem Church is the last fight in the larger-scale Chancellorsville campaign.

Following the battle, Salem Baptist Church is transformed into a hospital for wounded Confederate soldiers. One eyewitness described the scene inside the church house at that time:

Hundreds upon hundreds of wounded were gathered up and brought for surgical attention. . . . After the house was filled the spacious churchyard was literally covered with wounded and dying.

The sight inside the building, for horror, was perhaps, never equaled within so limited a space, every available foot of space was crowded with wounded and bleeding soldiers. The floors, the benches, even the chancel and pulpit were packed almost to suffocation with them.

The amputated limbs were piled up in every corner almost as high as a man could reach; blood flowed in streams along the aisles and the open doors.

The church is eventually restored after the end of the war and used for services until the 1950s, at which time the congregation, having built a new facility, gives the building to the National Park Service.

The bullet holes remain visible on the outside of the church building to this day.