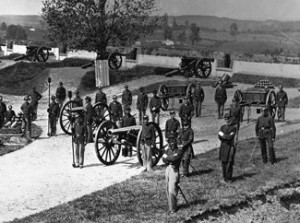 Today Confederate General Jubal Early and the Second Corps of the Army of Northern Virginia, having raided several towns in Maryland, approach Fort Stevens just to the northwest of Washington, D.C. Early had hoped to make a surprise invasion of Washington, but had been detained too long in the previous day’s Battle of Monocacy to reach the United States capital in a timely manner.

By the time he arrives on the outskirts of Washington, Union forces are prepared. The Battle of Fort Stevens takes place in the afternoon, although it is more of a skirmish than a full-scale battle. Each side fields about 10,000 soldiers each in the battle. U.S. President Abraham Lincoln leaves the White House to watch the fighting. On the morrow more skirmishing follows, but General Early quickly decides that a full attack would be foolish, and subsequently retreats.

Not only is Washington saved from a potential invasion, but the move against the Union capital, while drawing off some Union troops from Petersburg as the Confederate’s intended, does nothing to break the siege of Petersburg.

Meanwhile, some ten miles from Petersburg, Baptists in Richmond and nearby Manchester gather tonight in the Confederate capital for a Sunday School convention, an event noted by the Richmond Daily Dispatch.

A meeting of the “Sunday School Union,” composed of all the Baptist Sunday schools in Richmond and Manchester will be held at the Second Baptist Church to-night. These meetings were in days gone by very interesting, but have of late been much interrupted by the excitement of the times. They have recently been resumed, and the one to-night promises to be of unusual interest. Reports from the various schools will be read and several addresses may be expected. All persons who feel an interest in Sunday schools, and the public generally are invited to be present.

But in the days following the Dispatch seemingly forgets about the Baptist Sunday School meeting in the face of the skirmishing around Washington. And perhaps some of the Sunday School workers attending the Union conference have the war more upon their minds than Sunday School.