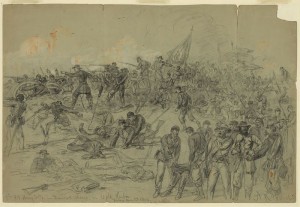 In the pre-morning duskness at 4:30 a.m., Union forces begin today’s assault on Confederate troops in the ongoing Battle of Cold Harbor near Richmond, Virginia. Although the federals breach the heavily defended rebel lines in a few places, the day does not turn out well for the Union. In close fighting, often hand-to-hand combat, the federals are defeated by the enemy. So decisive is the failure of the Union offensive that General Ulysses S. Grant calls off the assault at mid-day. The Union suffers up to 7,000 casualties in the morning’s fighting, while Confederate casualties are approximately 1,500. The eight hours of fighting are among the bloodiest and costliest of the war.

General Robert E. Lee‘s triumph today is a badly needed shot in the arm for Confederate moral. As he has done throughout the entire Overland Campaign, he commits his men wholly to defeating the enemy. At 11 a.m. this morning, one-and-a-half hours before Grant calls off the Union offensive and at a point where the Confederates are essentially slaughtering the federals, a delegation of Richmond officials arrives at the scene of the battle and, in the rear of the action, meet with Lee. “General,” they ask, “if the enemy breaks your line, what reserve have you?”

While Grant has been soundly whipped this day, he is far from giving up in this battle. And no matter what happens during Cold Harbor (which will continue until June 12), Grant is determined to ultimately turn Lee and position federal forces between the Confederate Army of Northern Virginia and the Southern capital of Richmond.

Even as the blood flows freely ten miles away at Cold Harbor, Southern Baptists of Virginia meet in Richmond at the city’s First Baptist Church. Like several other Baptist state convention meetings in the South this year, delegates pass a resolution of unwavering support for the Confederacy and offer a vote of support for the orphans of deceased Confederate soldiers.

But since Richmond is the political center of the Confederacy, the gatherings of the Baptist General Association of Virginia receive more secular news play than other Baptist state convention meetings. The coverage of this week’s Virginia Baptist meeting by the Richmond Daily Dispatch offers a window into what the non-Baptist Southern world views as important developments in Virginia Baptist life.

Of today’s convention gathering, the Daily Dispatch has this to say:

After devotional services reports on various interesting subjects were presented and discussed.

Rev J B Jeter read a document on the state of the country which deserves a place in the columns of every paper throughout the country. It was adopted as the utterance of the Virginia Baptists on the great issues before us.

Rev A E Dickinson presented a report on Army Colportage. Eighty missionaries have been in the employ of the Board, whose operations he superintends. They have baptized one thousand five hundred soldiers, while as many more, converted through their instrumentality, have united with other denominations.

The Board had published during the year about thirty five millions of pages.

Rev. A H Sands offered resolutions on behalf of the Sunday School Board of the Southern Baptist Convention, which were advocated by Rev W E Hatcher, the agent of the Board for Virginia.

Rev J B Taylor, Corresponding Secretary of Foreign Missions, represented that department as being in a healthy condition.–The Baptist Missionaries in China and Africa write encouragingly, though cut off from their Southern supporters.

Rev A E Dickinson read the report in reference to the children of deceased soldiers. The Association determined at once to provide for the maintenance and education of such. The following committee was appointed to carry out the views of the Association on this subject A E Dickinson, J B Jeter, J L Barrows, W F Broadus, Colin Rasa, Ro L Montague, and Wellington Goddin.

After a pleasant but brief session the Association adjourned sine die.