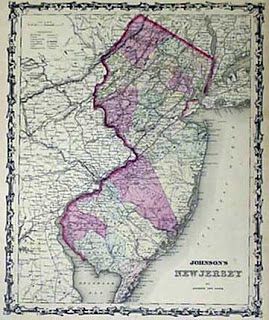 Today the West New Jersey Baptist Association convenes at Pemberton. As is the case with all the Baptist associations of the North that gather this fall, the war, whether voiced or not in official records, is uppermost on the minds of the men present.

Yet in the case of the West New Jersey Baptist Association, and many other Baptist gatherings, war-time sentiments are not confined to informal conversation.

Delegates assemble and go through the formalities of prayer and the election of new officers. Following the standard opening procedures, a committee on the “State of the Country” is formed.

Samuel Aaron, A. J. Hires, S. C. Dare/M. Jones, J. Hammett, T. G. Wright, and Joseph H. Kain are named to the committee. Today they begin drafting the statement, which, when finalized, is presented and voted into the associational record on the morrow.

The resolution, rather lengthy, leaves no doubts as the views of these Baptists less than two weeks after the fall of the Southern city of Atlanta.

Resolved, That Civil Government, whether among Christian or Pagan nations, Is an ordinance of God, intended to establish natural justice among men, and that our American Government is the nearest approach to right since the institutions of Moses.

2. Therefore, that this Southern conspiracy against our nation’s life Is the greatest political atrocity since Israel rebelled against Jehovah.

3. That as the Lord appointed war, pestilence, and famine to humble and subjugate the Jews,so we believe this nation has His sanction for making the costliest sacrifice of treasure and blood that history records, in order to exterminate, even with fire and sword, those devoted agents of disunion and barbarism, who perseveringly swear that they will destroy the Union or themselves.

4. That the measures thus far employed by our public representatives and sanctioned by the people, have, for the most part, been right and expedient, and that their results do, just now, afford abundant promise and glorious hope of the triumph of liberty. Justice and humanity.

5. That any terms of peace short of unqualified submission by the rebels, would be an act of unparalleled treoson against the industrial, social, and moral interests of man; and a mockery of the Divine Providence, which has so eminently exalted us in the political heavens, to be the pole-star of liberty to the human race.

Equating the justness of the United States government to the just rule of Moses in the Old Testament bears testimony to the high, even holy, esteem that many American (Northern) Baptists have for American democracy. Condemning the slaveocracy of the Confederacy as a government of bondage, rather than liberty, has been standard fare from Baptists of the North for the duration of the war to date. The demand for the “unqualified submission” of the Confederacy reflects the position of strength that the United States military now enjoys over the enemy.

Will justice, humanity and liberty soon win? At least on the surface, there is little doubt in the minds of the men present today. And with victory, the United States will stand tall and proud before and above other nations, a beacon of a triumphant Christ and the freedom He desires for all persons.