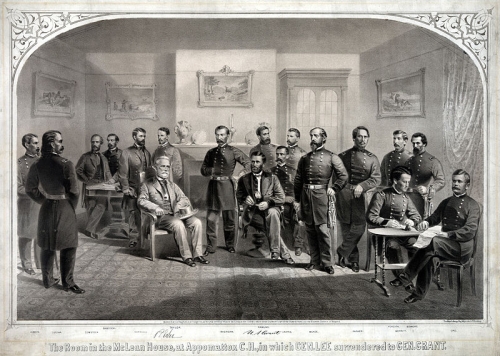 At dawn this Sunday morning Confederate General Robert E. Lee makes one final assault on Grant‘s forces. It is an act of desperation.

The Battle of Appomattox Court House does not last long. Although Rebel forces pressure Sheridan‘s first line of defense and some attain a nearby ridge, from the crest a large array of Federal forces is visible.

Upon learning that his Army of Northern Virginia is vastly outnumbered and surrounded on three sides, Lee finally concedes that there is no choice but to surrender: “… there is nothing left for me but to go and see General Grant, and I would rather die a thousand deaths…,” the general sadly proclaims.

William McLean, a local resident, offers to host the surrender meeting in his home. Ironically, McLean had also been present to witness the first major battle of the war, the First Battle of Bull Run, a clash that occurred on and around his property. Seeking to escape the war, McLean and his family afterwards had moved to Appomattox. Now, the war has returned at its conclusion.

Grant arrives at the McLean house about 1:30 PM, his muddy field attire contrasting with Lee’s immaculate dress uniform. The two former enemies make small talk for a few minutes before the discussion turns to the matter of the terms of surrender.

In orderly and amiable fashion the generals discuss and settle upon mutually-acceptable details, the manner and substance of the surrender terms later becoming known as “The Gentlemen’s Agreement.” The soldiers of the Army of Northern Virginia put down their arms and pledge not to fight against the United States again, in return for retaining their freedom and permission to return to their homes.

Union soldiers are ready to celebrate, but Grant restrains them. “The war is over,” the general declares, “the Rebels are our countrymen again, and the best sign of rejoicing after the victory will be to abstain from all demonstrations in the field.” Hostilities between the armies now ceased, Grant provides rations for the famished Confederates.

The news does not reach Washington until late at night, with most residents of the nation’s capital not learning of the day’s events until the morrow.

The surrender of the Army of Northern Virginia is a relief for some Confederate soldiers, a disappointment to others. Among the latter is Baptist preacher and Confederate Chaplain William Wiatt. Present at the surrender, Wiatt is anguished yet resolute.

The question has God forsaken us? Is our Confederacy ruined? I, for one, can’t believe it; God I verily believe, has humbled us to exalt us; I believe He will, yet in His good way & time grant unto us deliverance & prosperity & honor; His wisdom & power & goodness are the same … can all the prayers & faith & hope & anxiety, and blood, and sacrifice, in the name of the Lord & of the right be in vain? I can’t think so; I look to a glorious future to our beloved South. Lord, teach us to humble ourselves before Thee, repenting of our sins and trusting in Thy son.

Wiatt’s list of sins, however, does not include slavery. The war may be over, and African Americans liberated, but many white Baptists of the South maintain their belief in the superiority of their race and the rightness of the southern cause of black slavery. These unwavering convictions, baptized by a literal interpretation of the Bible, will bath the South in hatred and blood for over a century to come.

But for the moment, this nearly four-year war is unofficially over. As the news of Lee’s surrender spreads throughout the South in the coming weeks, other Confederate armies lay down their arms. Months, however, will pass before the news of the South’s defeat–and the news of the end of slavery–blankets the former Confederacy.