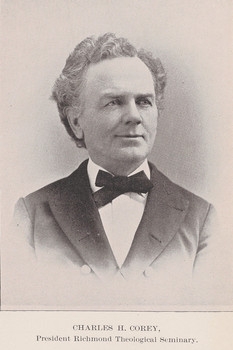 Northern Baptist minister Charles Henry Corey, serving with the non-denominational United States Christian Commission, this month wraps up his work among Union soldiers stationed at Morris Island, South Carolina, while pastoring the Wentworth Baptist Church. Upon completion of his service, he briefly returns to Seabrook, New Hampshire where he marries Fannie Sanborn before returning southward.

In September 1865 the new couple move to Charleston, where for the next two years Corey works for the American Baptist Home Mission Society in assisting African Americans in organizing churches, raising money for building projects, and ordaining ministers. Afterwards he serves as president of the black Augusta Institute (later Morehouse College) until 1868, whereupon he is transferred to Richmond, Virginia to lead seminary education for African Americans through what later becomes Virginia Union University.

Corey’s is one of many Northern Baptist ministers who begin serving either soldiers or freedmen, or both, in Union controlled areas of the South during the war, and afterwards spend a number of years assisting Southern freedmen