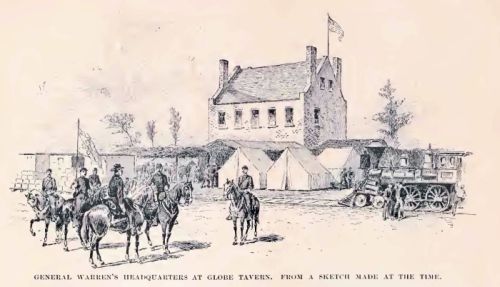 In the trenches around Petersburg, Union General Ulysses S. Grant sends Maj. Gen. Winfield Scott Hancock off on an offensive against Richmond. For the next six days Federals and Confederates skirmish in the Second Battle of Deep Bottom. In the end, the Confederates win the battle by successfully thwarting the attack on the Confederate capital.

Unfortunately for the South, however, the battle further weakens Confederate forces defending Petersburg, and the Rebels prove incapable of preventing Union forces from seizing control of the Weldon Railroad, a key supply and communications artery for the Confederacy. With the railway under Union control as the Battle of Deep Bottom comes to a close, Confederate General Robert E. Lee is forced to reroute supplies and communications to a longer, more convoluted path. For their part, the Federals in the days afterward are able to extend their fortifications further westward, forcing the numerically inferior Confederate defenders to stretch their forces all the thinner in defending Petersburg and, ultimately, Richmond.

Meanwhile, in Covington, Kentucky, across the river from Cincinnati, the First Colored Baptist Church of Covington is formally established this month with twenty-two charter members. The first pastor of the congregation is George W. Dupee, who pastors the church from now until 1868.

The Covington congregation is the latest of many African Baptist churches that have been established during the past two years, following the Emancipation Proclamation of January 1, 1863 and the South’s loosening grip on slaves as Union occupation of portions of the South grows steadily.  Freedmen in the border state of Kentucky are growing more and more bolder in demanding faith autonomy. Black residents of Covington are perhaps even more confident than most, as their town overlooks the Ohio River and the free North that lies just across the great river.

Dupee’s life has been a journey to freedom for himself and others. Born in slavery in Kentucky in 1826, while yet a slave he was ordained to the Baptist ministry in 1851 by well-known Baptist ministers Dr. J. M. Frost, pastor at Georgetown, and Georgetown College President J. L. Reynolds. He soon assumed the pastorate of the Georgetown Colored Baptist Church and, while yet preaching there, was purchased at a slave auction by Dr. W. M. Pratt, Lexington Baptist pastor, and others. His benevolent new owners permitted Dupee to purchase his freedom.

As a freeman, Dupee assumed the pulpit of Paducah’s Washington Street Church in 1858, occupying that pulpit for thirty-eight years. In addition, he concurrently occupied other pulpits while pastoring in Paducah, including the First Colored Baptist Church of Covington.