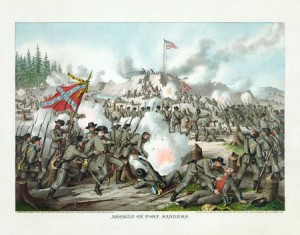 On the heels of the Confederate defeat in the Chattanooga Campaign, Confederate Lieutenant General James Longstreet today attempts to break through federal lines surrounding the Union-occupied city of Knoxville and under the command of Major General Ambrose Burnside.

The Battle of Fort Sanders, however, proves to be one of the quickest and most lopsided battles of the war. Telegraph wire strung knee high–a first in the war–trips up the rebel advance. Many of those who continue forward suddenly find themselves stuck in an insurmountable ditch. So disastrous is the attempted offensive that Longstreet calls off the attack after only twenty minutes. While the Confederates suffer 813 casualties (200 of whom are captured in the ditch), Union casualties number only 13. The Confederate siege of Knoxville is now effectively over.

Meanwhile readers of today’s New York Times are treated to a summary of a Baptist Thanksgiving sermon delivered earlier in the week, here excerpted:

The South, Sixteenth and Calvary Baptist Churches held united services in the latter Church, Revs. A.H. BURLINGHAM and WM.P. MICKLES and Dr. GILLELTE, the Pastors of the three Churches, participating. The two latter gentlemen conducted the introductory and closing exercises, while the former delivered the sermon to a large audience, from the 122d Psalm.

“I was glad when they said unto me let us go into the house of the Lord.”

He opened his remarks by saying that the Psalm from which the text was taken is one of the Songs of Degrees, so named probably on account of the going up of the people to Jerusalem to attend the annual festivals. As they were accustomed to march to music, David composed these songs of degrees for their use. How grand and solemn must have been their entrance into the city of the Great King, while marching to the intoned strains of the rich minstrelsy of the old Hebrew poets. They were going up to take a walk about Zion, to count her towers and consider her palaces. To-day we come to no such house as the pious Jews thronged. The curtains of the ancient Tabernacle are folded forever. The Temple has gone into ruins never again to rise. God’s abode is now in the hearts of His people. His house is now where his people meet. We speak of the Sanctuary as a theme for thanksgiving. We speak of it as as a Power, as a Memory, and as an Altar. It is a Power radically affecting the interests of the community surrounding it. It is a Memory entering into and moulding the life of those who throng it. It is an Altar on which we offer worship to God, and where, when we lie there in willing sacrifice, God meets us and conforms us to Himself. Our Chief Magistrate, when he put forth his Proclamation for this day of public thanksgiving, recognized and acknowledged the high place of the sanctutuary in Christian civilization. It is a sublime thought that a nation to-day in loyalty to its constitutional head honors God in His courts. If there ever was a time when the divinity of the sanctuary should be nationally conceded, and the gates of Zion be nationally pressed and entered, that time is now. All the people need to enter the house of the Lord today, God is to be praised in His temple that we have yet a country, and that with His blessing upon us, we always mean to have one. We offer thanksgiving in the house of the Lord to-day for our victories and our defeats. After alluding in a pathetic and truly loyal manner to other causes for thanksgiving, the speaker said, we thank God for the very tears we shed over the memory of him whose death on the field we mourn. We thank Him with the heart that aches over a sick and wounded boy, brother, husband or lover, who is in the hospital or camp to-day, or who has toiled his weary way to the home he left to show the sweet ministries of our undying love. We thank Him in the gushing sympathies which prompt us to bear a thanksgiving portion to-day to the desolate homes of those who have been made widows and orphans by the terrible exigencies of war. We thank Him that we are living now in the dawning splendors of a better civilization, the high noon of which shall soon send its flashes of light and its blazonry of glory down the coming ages, giving promise to our expectations and the world, that the wheels of progress are to roll on unreversed and unchecked till God’s full purpose in launching this nation is complete.

The recent days’ Union victories at Chattanooga and Knoxville give Northern Baptists all the more reasons for which to be thankful.