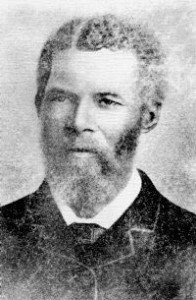 Peter Barrow was born a slave near Petersburg, Virginia in 1840. As a child he was taken to a plantation in Alabama. Earlier this year, perhaps when Union naval and army forces invaded and gained control over the Mobile Bay area in February, Barrow, now a young man, managed to escape. Fleeing to Vicksburg, this week he enlists in Company A, 66th U.S. Colored Infantry.

Barrow serves in the army for the remainder of the war, seeing action in Louisiana and Arkansas. Like many other former slaves-turned-soldiers, Barrow’s Union Army service does not end until well after the war. On November 1, 1865 the former slave is appointed as a Sergeant in the U.S. Army. By the time of his release from the military in March 1866, Barrow has served three years in the army and is ready to exercise his freedom in society and live a productive life in the post-war South.

Settling in Vicksburg and marrying Julia, the Union veteran soon enters politics and is elected to the Mississippi Legislature, one of many black Americans serving as Republican-elected officials during the years of Reconstruction. His service consists of two terms in the Mississippi House of Representatives and one term as a senator from the Vicksburg district. Nonetheless, in post-Reconstruction Mississippi Barrow senses little opportunity to further improve his life and that of his family. Thus in 1889 the Barrows (Peter and Julia eventually having six sons and one daughter) move to Deer Park, Washington, near Spokane, where Peter declared in retrospect, “I jumped out of hell and landed in heaven on both feet.”

In Washington Barrows re-engages in politics, becoming involved in the Populist Party. In addition, he helps found the John Logan Colored Republican Club, a club (like many other post-war black organizations) named after a prominent white figure who had been instrumental in helping secure freedom for slaves. Logan, from Illinois, had been a Union Army general who fought in the the Vicksburg Campaign, served as temporary military governor of Vicksburg following Union victory, and after the war served as a U.S. senator from Illinois.

Taking advantages of the opportunities afforded him in Washington, Barrows also becomes a businessman, purchasing a large tract of land and founding the Deer Lake Irrigated Orchards Company, a large apple orchard in Stevens County. He employs some one hundred black men in his business. His successes in the world of agribusiness enable him to take a leading role in the state’s Farmer’s Alliance Movement.

Ever entrepreneurial, Barrow also becomes involved in the publishing business, of which The Citizen, a black newspaper, is a legacy of Peter and his family.

A tragic accident befalls Rev. Barrow when he is struck and killed by a streetcar while attending a church convention in Tacoma on July 28, 1906. Yet the life and contributions of the enterprising Baptist were not to be forgotten. On the east side of the Spokesman-Review building on North Monroe Street in Spokane are twelve bronze busts honoring the city’s early business and community leaders. Among the twelve memorialized is Rev. Peter Barnabas Barrow, identified as a “Pastor, Entrepreneur and a Publisher.”

Born a slave, Peter Barrow is thus remembered for a long list of amazing accomplishments of which few post-war American citizens surpassed.

To the present day the Barrow family name remains inscribed on the cornerstone of the Calvary Baptist Church.